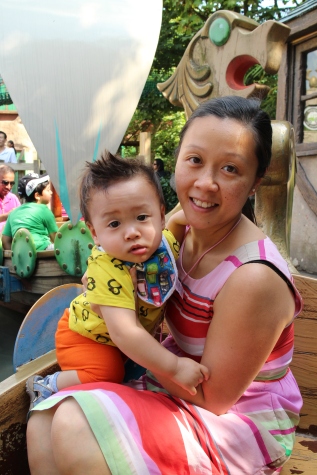 Last night, I woke up in the middle of the night and was thinking about Hugo and how he would adapt living in the new house when we move eventually. If there were any spirits in the new house I would ask them to embrace my family and look after Hugo as well. I then was reading Simon’s latest post he shared and agreed that in whatever form Hugo might come busting through our bedroom door I would not be scared and would accept him without any hesitation.
My thoughts about Hugo wandered back to when he was away for whole days at his nursery while I was working in the City. The carers used to tell me that Hugo had a lovely day but on several occasions when going through his family photo album he would cry every time when he came across the photo of himself with mummy and it’s because he realises mummy has been away for a whole day and he misses her. The photo was taken during a hot summers day at Chessington adventure park in 2013.
Hugo has died nearly two months ago now, it’s a long time and I kept thinking that if he misses me he should talk to me in my dreams. Please Hugo come to mummy’s dream.
I closed my eyes and went back to sleep. I started dreaming……….we were in our sitting room watching TV in the late afternoon. My dad was on the sofa reading his newspaper, Simon’s dad was just standing around looking at Hugo’s photos near our book shelf and I was sat on the end of our white sofa. I said to all of them, please don’t be scared and Hugo is sleeping upstairs.
I suddenly got off the sofa and sensed that I should be going upstairs to check on Hugo and found him in Jasper’s room standing with one foot on the side of the bed and the other on the wooden stepper. He was calling for me as he was stepping down and off the bed. I came to him, carried him in my arms and took him downstairs to see everyone. I kissed and cuddled him really tight and it felt so real. When we got down the stairs, I felt that everyone had knew that I was cradling air and sat down back on the end of my white sofa. I picked up the small ball near by my foot and tossed it up to play with Hugo. He really enjoyed it and laughed away. Simon’s mum came into the room and realised Hugo was in my arms in spirit and joined in to play too. She also took Hugo off me and gave him big hugs and kisses and handed Hugo back to me.
My mum came into the room and sat next to me. By then I was grabbing the bigger football and with Hugo sitting on my lap, we played catch with Jasper and Simon just like old times. We took a rest and I turned to my mum and said “can you see Hugo? His hand has reached across to touch you for a bit of a squeeze”. My mum replied, yes dear, I can feel his little chubby hand. Then I woke up from my dream as Simon’s alarm went off.
I told Simon immediately this morning and we both sat on the bed and cried. We both realised that Hugo missed mummy and he came to my dreams. I felt happy I dreamt about him but also extremely sad that he is not actually here physically. I am still missing my baby so much. The dream was so real and the cuddles and kisses and laughs all felt so vivid that I didn’t want to wake up! However, the more I want to see him the more sad it is when I realise it is only in my dreams that I can. I want him here with me so badly – this is the grief that takes over and it hurts so much. I still can’t imagine how I can be less sad over time.
Hugo’s family photo album consists of a series of laminated photos with Jasper, Daddy, all the grand parents and his uncles. The carers made it into a lovely album that he could flick through when he was feeling a little upset during the long day at nursery. Every time he comes across this particular photo of him and mummy, he would always cry to a point where the carers had to take it away for a while. It’s so sweet when I heard this from the carers as it made me realise that he really misses mummy being away from him more than anyone else, mummy was his world (and daddy of course). It was a special bond between us, we had never been apart for long days until he started fulltime nursery. This family album accompanied Hugo inside his small white little coffin. Now he can look at them wherever he is, whenever he wants.
I love you always Hugo. Mummy kisses forever xxx

7 thoughts on “Missing you”